Is it fair that Coca-Cola is asking consumers to pay twice as much for this high-protein drink as for regular milk? Image: Fairlife.

Americans don’t drink much milk anymore. U.S. dairy consumption fell 2.6% in July from a year ago. The Washington Post reported this summer that milk consumption per capita is about 0.8 cups per day. The latest data from the Ministry of Agriculture shows that milk sales fell 4% in July compared to the period a year earlier.

At the same time, milk prices reached record highs in October. The average price of a gallon of whole milk reached $3.77. This is almost 1% more than the previous month and 9% more than in 2013.

So what’s the bright idea Coca Cola (KO -0.43%) should boost sales? Introducing an expensive new dairy product. Coke says Fairlife will hit store shelves in December. It represents the premiumization of milk. According to the company, Fairlife Lactose Free will contain 50% more protein and calcium and half the sugars of regular milk. It will come in 2% milk, skim and 2% chocolate milk.

Why not make a premium product from the most pedestrian milk? Because we no longer deserve our milk mustaches. The average American drank over 30 gallons of milk a year in 1970. We drank just over 20 gallons in 2012. 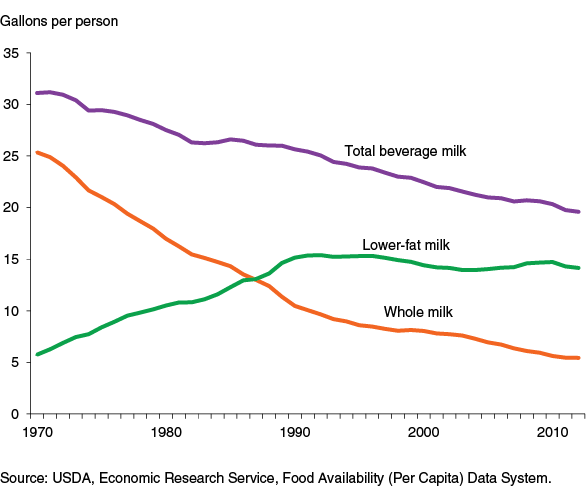 Consumption of some dairy products, such as cheese and yogurt, has increased since the 1970s. However, declining milk consumption has caused the total number of pounds of dairy products available to eat or drink each year to drop by 339.2 pounds per person in 1970 to 275.9 pounds in 2012.

What could go wrong with Coke’s premium milk?

Coca-Cola believes Fairlife can be different. Produced in partnership with Select Milk Producers, Coca-Cola’s premium dairy product contains 50% more protein and half the sugar of regular milk. It is also lactose free.

There’s no doubt that the beverage maker is trying to capitalize on the popularity of protein.

In the United States, sales of packaged foods with protein claims on their labels have jumped 50% over the past four years. This summer Hormel Foods paid $450 million for protein supplement drinks maker Muscle Milk. General Mills is fortifying Cheerios cereals with protein.

At twice the price of regular milk, Coca-Cola thinks Fairlife will end up “raining money”.

Good luck with that.

The main dairy processor in the United States is Dean Foods (DF). Its share of the milk market is estimated at 35%. Dean reported a third-quarter loss from continuing operations of $0.16 per share due to “challenges facing the dairy industry.” Unadjusted fluid milk volumes decreased 1% year over year.

Raw milk costs were $23.51 per cwt during the quarter. This is 24% more than the same period last year and it is the second highest quarterly average in the history of the American dairy industry. The highest period was the second quarter of 2014. It is also trying to take advantage of the protein craze. In August, he launched a high-protein brand of TruMoo chocolate milk.

Dean Foods sees TruMoo becoming a billion dollar brand. Convenience store sales increased 11% in the third quarter and their market share rose to more than 2%. It will target TruMoo Protein Plus at young adult males. In 2013, prior to the nationwide launch of TruMoo Protein Plus milk, Dean Foods reported selling over 100 million units of TruMoo flavored milk through retail channels.

Coca-Cola’s Fairlife product is part of a campaign by the Dairy Management organization to boost milk sales. Some 49,000 dairy farmers and processors fund Dairy Management, or DMI, through a “fee” program. Dairy producers pay $0.15 and dairy importers pay $0.75 for every hundred pounds of milk they sell or import. The money is paid into a generic fund for the promotion of dairy products called the “milk levy” managed by DMI.

Funds from the levy were behind the creation of the popular “Got Milk” campaign.

A report on AgWeb says DMI’s partnership with Coca-Cola is part of a $500 million investment program. It will mainly target processing plants and stainless steel infrastructure. But the program will also feature other branded products in addition to Fairlife. Partners beyond Coca-Cola include Dairy Farmers of America, Darigold, KrogerMaryland and Virginia Milk Producers, Southeast Milk and Shamrock Farms.

Protein demand may increase, but milk consumption continues to decline. And charging twice as much for the premium dairy beverage when half of America’s adult population already swears to drink milk won’t entice them to drink it.

Coca-Cola is facing a severe drop in soda sales. It looks like he will also end up crying over spilled milk.

Why Aurora Cannabis Stock was smoked on ...